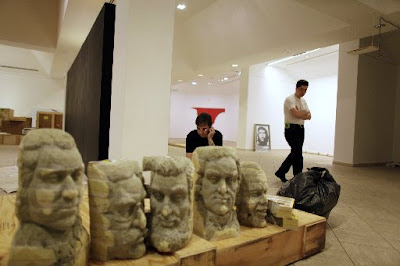 U.S. artists are preparing for the first big group exhibition of American art in Cuba since the 1980s in what they hope is a harbinger of better relations between the two countries.
The work of more than 30 artists representing New York City's Chelsea district will be displayed March 28 through May 17 at Havana's Museo Nacional de Bellas Artes in an exhibit called ''Chelsea Visits Havana.''
U.S. curator Alberto Magnan said on Tuesday the exposition's purpose was to give Cubans a chance to see American art, little of which has made its way to the Communist-run island during the past 50 years of hostilities between the United States and Cuba.
For more information, click here.
Photo:US curator Alberto Magnan, center, speaks on his phone behind the ''New Mount Rushmore'' sculpture at the National Museum of Fine Arts in Havana, Friday, March 20, 2009. The piece is part of the ''Chelsea Visits Havana'' exhibit, the largest collective display of contemporary American art in Cuba in nearly a quarter-century. (AP Photo/Javier Galeano).
at marzo 24, 2009