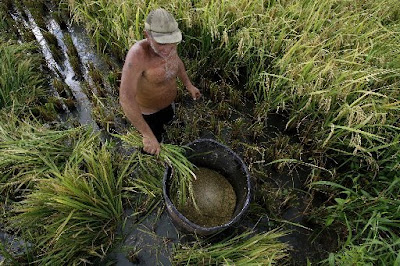 U.S. rice growers expect President Barack Obama to further ease Washington's trade sanctions against Cuba this year and say this could lift U.S. rice sales to the island to at least 200,000 tonnes annually.
U.S. Rice Producers Association President and CEO Dwight Roberts told Reuters he fully expected Obama to enlarge on "baby steps'' taken by the administration and Congress earlier this month which softened some of Washington's travel and trade restrictions against the communist-ruled Caribbean state.
"I definitely expect we will see a continuing process of easing the trade restrictions ... that is what we are hearing from high-level people in Washington,"
Roberts said in a phone interview in Miami late on Friday.
Speaking after attending a conference on potential U.S.-Cuba trade, Roberts said while he did not foresee an immediate end to the 47-year-old U.S. trade embargo against Cuba, he did anticipate the removal of "bits and pieces." (Reuters)
Photo: farmer picks rice at the Camilo Cienfuegos Agricultural Cooperative in Bahia Honda, Cuba, Friday, June 6, 2008 (Javier Galeano/AP).
at marzo 21, 2009