Cubans worried about the militarization of the government 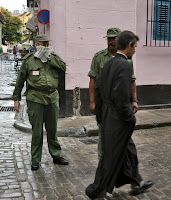 ''President Raul Castro's cabinet shake-up last week has raised concerns among Cubans about the military's increased role in government and how it could affect their daily lives and the future.
Raul Castro's reshuffle, the biggest since he took over from his ailing brother Fidel Castro in early 2008, brought more generals and former officers into the government. It also removed two prominent civilian figures -- Felipe Perez Roque and Carlos Lage -- long associated with Fidel.
The changes skewed further in the military's favor the seven-man leadership of the powerful Political Bureau of the Communist Party and the Council of State, of which Lage was one of three civilian members''.
For the rest of this article, click here.
Photo: Cubans militaries in Old Havana, in August, 2006.
at marzo 09, 2009