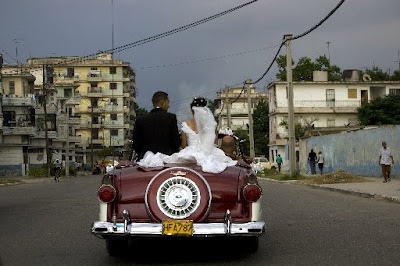 El corresponsal Ray Sánchez escribe en el Sun Sentinel sobre el deterioro no sólo del Palacio de los Matrimonios sino del matrimonio en Cuba, como unión confirmada por la ley entre dos personas:
The extravagant home of a brother of the president who legalized divorce in Cuba nearly a century ago is now a ramshackle wedding palace.
In a country where 60 of every 100 marriages end in divorce, the dilapidated mansion stands high atop a rocky promontory as a monument to a long-suffering institution.
The grand halls on the upper floors no longer are open to the public because of falling ceilings. The terraced gardens, once the site of blissful receptions, are overrun with weeds.
Over the years, wedding guests have made off with some of the garish furnishings. Now, workers keep a close eye on the movement of guests.
The yellowish paint is faded and moldy. Some windowpanes are cracked. There is no cleaning staff. Even the director, who performs marriages, occasionally picks up a broom before a ceremony.
"The building is a beautiful thing, but it also can be quite depressing because of its bad condition," said a longtime worker who asked not to be identified.
The same could be said about the institution of marriage on the island.
Para leer más, pinche aquí.
at marzo 22, 2009