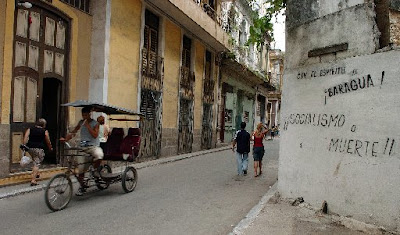 ''There are signs that change may finally be coming to Cuba, 50 years after the revolution that brought Fidel Castro to power. In a major shakeup, Raúl Castro, Fidel's brother, fired several high-level officials last week. While Raúl did more to raise expectations than living standards in his first year as president, he may now be positioning the government to go beyond the tentative reforms so far introduced. Then again, he might merely be installing loyalists who share his view that the regime should keep a tight grip on society.
What's more certain is the need for change in Cuba. Last year's hurricanes cost the already poor island nation $10 billion, 20 percent of its GDP. The global economic slowdown has dampened tourism. The population of 11 million is shrinking, in part because of a housing shortage that's leading many families to have fewer children. Cuba's people, the lion's share of who were born after 1959, face a future that promises little in the way of either prosperity or freedom.
Some American conservatives maintain that all this is reason enough for the United States to persist in its policy of ignoring Cuba diplomatically and sanctioning it economically. At least in principle, one could argue that the revolution is running out of steam and that regime change from within may finally be at hand. The problem is that this argument ignores Cuban reality. The country is not near the precipice of collapse. To the contrary, the intertwined party, government and military have matters well in hand. The population, ensured basic necessities along with access to education and health care, is neither inclined to radical change nor in a position to bring it about.
The American policy of isolating Cuba has failed. Officials boast that Havana now hosts more diplomatic missions than any other country in the region save Brazil. Nor is the economic embargo working. Or worse: it is working, but for countries like Canada, South Korea and dozens of others that are only too happy to help supply Cuba with food, generators and building materials. Those in Congress who complain about the "off shoring" of American jobs ought to consider that the embargo deprives thousands of American workers of employment''.
The rest or this article is here.
Photo: Street in Old Havana.
at marzo 07, 2009