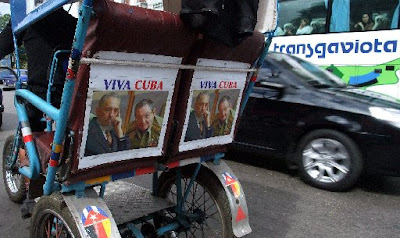 For the first time, the United States will take a seat on the Council, while some countries with dubious human rights records prepare for unopposed re-election.
With most regional slates finalized, and few offering any competition, China, Russia, Saudi Arabia and Cuba look set to begin additional three-year terms after the 192-member General Assembly votes on May 12.
In support of the U.S. candidacy, the State Department on Monday released a voluntary pledge outlining its commitment to human rights. China, Russia and Saudi Arabia have yet to do so, although Cuba has.
In its pledge, Cuba’s communist government reported ''significant progress'' in Cubans’ enjoyment of human rights, identifying as the most important achievement ''the right to self-determination'' in the face of ''hostility, aggressions and blockade imposed by the superpower.''
For more information, click here.
at abril 28, 2009