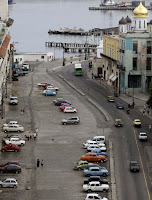 La Latin America Initiative, de la Brookings Institution, ha enviado a Cuaderno de Cuba la opinión del especialista Mauricio Cárdenas sobre el fin de la exlusión de la isla de la Organización de Estados Americanos:
Enclosed are initial reactions by Mauricio Cardenas, Senior Fellow and Director of the Latin America Initiative, to the breaking news of the OAS General Assembly’s decision to readmit Cuba into the organization.
Do you think this was the right decision?
Absolutely yes. Keeping Cuba out of the OAS was untenable for three reasons. First, the elements that justified it in 1962 are no longer valid. Not only the Cold War is over, but also Cuba is not trying to ''export the revolution'' to other countries. The second reason has to do with change in Cuba. Keeping Cuba politically and economically isolated has not been useful from the point of view of promoting reform. The third reason is political. If the U.S. wants a partnership with Latin America it can no longer impose its point of view. I think Obama is right in taking this course of action, even if some sectors in the U.S. think that democracy in Cuba should have been a precondition for readmission.
Are the Cuban people going to benefit?
The Castro brothers have said that they have no intention to join the OAS, which they consider decrepit. But Cuba will join, because doing so will bring the needed financial resources that the Inter American Development Bank can offer. More interaction between Cuba and the outside world will ultimately increase the flow of information and opportunities for the Cuban people. This will catalyze change in the medium term. Now, the OAS and the IDB should work hard to bring political and economic reform to the island. They should be careful in how to do this, but the average Cuban will gain more from having these institutions in than from keeping them out.
Photo: People make their way along a street in Havana, Wednesday, June 3, 2009. The Organization of American States on Wednesday lifted a decades-old ban on Cuba's participation in the group and cleared the way for the island's return despite initial U.S. objections. The decision was taken by consensus, meaning the United States accepted it, during the 39th general assembly in San Pedro Sula, Honduras (Javier Galeano/AP).
at junio 03, 2009